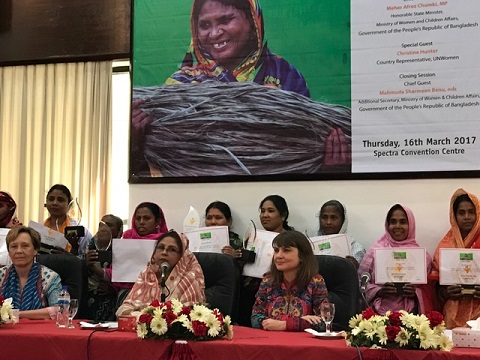 Given the centrality of Women’s Economic Empowerment (WEE) to realizing Bangladesh’s aspiration of attaining middle income status, CARE Bangladesh has organized a Conference on WEE on March 16, 2017 at the Spectra Convention Centre, Dhaka as part of its program to celebrate international women’s day.

The conference, this year was titled – “Women’s Economic Empowerment – Investing in Emerging Priorities”.

Women’s participation in the economy mainly in the agricultural sector have remained instrumental to drive the remarkable economic growth of Bangladesh. Their contribution both in formal and informal sector and of paid and unpaid nature has been instrumental. The conference emphasized that women’s contributions as women farmers to the sector should be encouraged and supported.

Accordingly, two women farmers of the USAID Agricultural Extension Support Activity Project – Asma Khatun, group leader of Bhrammandia Pashchhim Para Dairy Group of AESA project, a dairy farmer and paravet by profession of Bhrammandia Pashchhim Para under Panchuria union of Rajbari Sadar upazila of district Rajbari and Jaherun Begum, member of the Shalepur Pashchim Para Dairy Group of the village Shalepur Pashchim of Char Harirampur union under Char Bhadrashan of District Faridpur who was elected as local UP member were awarded at the conference.