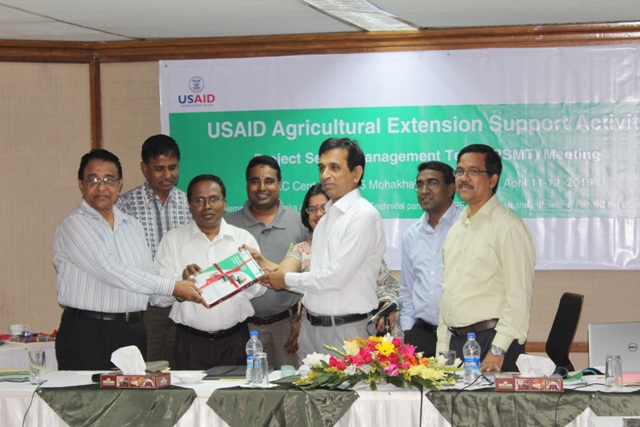 In the two-day meeting the participants discussed project progress on technical and operational activities of year four. One of the important events of the PSMT meeting was to unveil the project’s Annual Report of year 3 along with three value chain (beef fattening, dairy and jute) based videos developed by the project. Dr. K. S. Huda, Director, Program, Dhaka Ahsania Mission handed over the Annual Report and the videos to the project focal point Mr. Md. Zakir Hossain, Deputy Director (Project Implementation & Evaluation), Department of Agricultural Extension (DAE), Ministry of Agriculture.

Acknowledging the value chain videos, Dr. Huda appreciated the collaborative project efforts of the implementing organization Dhaka Ahsania Mission and the technical partners: CARE Bangladesh and mPower. He said though the farmers face many difficulties in their lives, still they have improved their livelihoods despite the problems; the field capacities have been increased due to the project’s interventions. He suggested to develop an indicator to monitor the women empowerment due to project’s involvement and also encouraged all to capture better and qualitative photographs to visualize project activities.

Based on the comments of the regional managers’ on the increased usages of the AESCs, the focal point suggested to take more promotional initiatives for the centers; he suggested to print and disseminate leaflets, booklets, etc. at the field level for mass awareness of these centers.

Regarding the issue on joint monitoring of AESCs with DAE as per MoU, the focal point suggested to put more emphasis on SAAOs training and how they have been helping the farmers through their learning. He also suggested to monitor if the SAAOs are sharing the information of the Krishi Kotha with the local farmers.

For the sustainable context of the AESCs, Mr. Zakir suggested more field visits of the project and DAE management level staff to the four demo upazilas. He also suggested to increase the relationship between the SAAOs and the project field level staff.

Another important feature of the PSMT training was to review the project’s Annual Work Plan (AWP) per the recommendations of the mid-term evaluation (MTR) report.

In reference to the mid-term evaluation report, Mr. Anowarul Haq, Director, ERPP, CARE Bangladesh appreciated all for the project achievement so far despite last year’s political turmoil.  He said there are lots of achievement of our project – the FPGs have increased productions as they are continuously adopting and following the improved five practices.

Mr. Haq also mentioned that the roles of the farmer leaders (FLs) needed to be further strengthened as the project is in year four – thus the FLs should be encouraged to take lead in the group activities.

Mr. Bidyuth K. Mahalder, Chief of Party, Ag Extension Project thanked all the guests and the participants of the meeting and said that the project has achieved a lot so far and everyone has contributed to the success of the project. He encouraged all to work hard and sincerely so that the goal of the project can be accomplished and the farmers would get benefited through the project’s activities.

DCOP-Operations, Regional Managers, District Managers, officials from project head office and field offices along with senior staff from CARE Bangladesh and mPower were also present at the meeting.