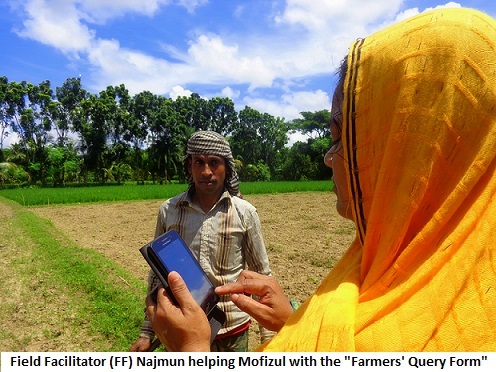 “Jute” was known as “the golden fiber” for its color and high cash value in Bangladesh which in course of time lost both its essence in terms of color and worth. The easily available low variety of Indian seeds, artificial fertilizer, strong pesticides and unflattering retting process of the raw jute fiber barred the farmers to have better quality of jute especially in the south-west part of the country.

Md. Mofizul Islam of village Kaler Danga of Brhamma Rajpur union of Shatkhira district had very nominal lands to cultivate thus he took lease from another farmer and started harvesting jute in the leased lands to improve his condition. He planted the Indian Maharashtra and Bankim variety which is easily available in the market. After the harvest, he also extracted the jute fibers following the usual local retting process.

But despite of his hard work he could not get better selling price for his jute. He was very sad as he worked so hard to improve his condition.

The jute fibers which come from the jute plant are first extracted by retting. The retting process consists of bundling the jute stems together and dipping them in slow running water. But the process is not always followed properly. Most of the jute farmers of the area including Mofizul used to put soil and mud directly on the jute to dip the fibers in water which resulted in giving dark, brownish and lifeless colored jute.

Mofizul believed that if he could cultivate good quality and golden colored jute he could have sold the jute in better price.

After joining the group, he received training on jute production where he was encouraged to use the local Bangladeshi variety: “09897” and was also strongly advised to use natural and organic manure in his lands. The training was facilitated by Mr. Neelkantha Sarker, the local Sub Assistant Agricultural Officer (SAAO).

As a part of the project, Mofizul also went to two cross visit programs at Chatmohor, Pabna and Monirampur, Jessore to learn about the transplantation process of jute – where the jute is cultivated like rice – it is sowed in soil like rice planting method.

After receiving the training and attending the cross visit programs, Mofizul followed the whole process of jute cultivation and this time he found that his harvest has almost doubled.

He also followed the instructions of the training facilitator while doing the retting process. This time he used plastic layers on the jute and then used soil and mud to sink the jute fibers into the water. The result was amazing – he got golden colored jute this time! The plastic layer helped retaining the jute’s golden color.

Last year he sold per kilogram of jute for taka 800-850 and this time he is expecting to sell the same for taka 1250-1280 because of the bright colored jute.

Acknowledging the project’s effort to support the farmers with effective and proper knowledge, Mofizul believes he would be able to use his learning and elevate his condition to a great extent.

He also received extensive support from the “Farmers’ Query Form” of the Ag Extension Project.