Inauguration of ‘A-Card’: Smallholders’ Access to Microfinance through Bank 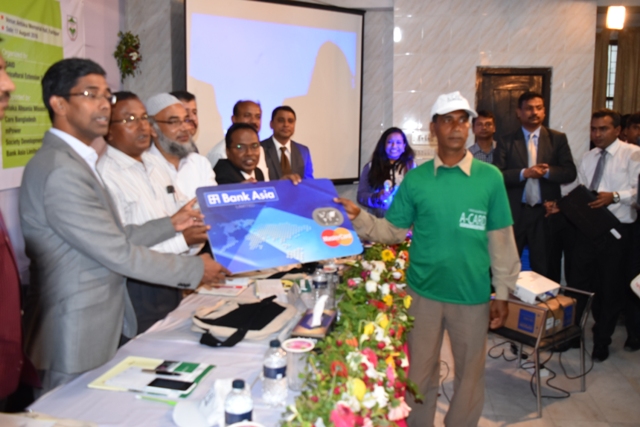 The USAID Agricultural Extension Support Activity works within the 12 FtF (Feed the Future) program districts in southwest and central Bangladesh in order to sustainably improve the food security and nutrition situation for vulnerable smallholder farmers, with an emphasis on women. The project targets approximately 110,000 farmers and organizes them into 3,854 value chain based farmer producer groups (FPGs). These groups are trained on improved agronomic practices for better yields and also are linked with public and private extension service providers, input retailers and output market actors. The project is being implemented by Dhaka Ahsania Mission (DAM) with technical partners: CARE Bangladesh and mPower.

The project also facilitates FPGs’ linkages with different MFIs to start saving process and have access to finances. At this context, the project takes lead and signed a tripartite MoU with mutually agreed terms and conditions initially with an MFI, Society Development Committee (SDC), Faridpur and Bank Asia Ltd. in piloting the ‘A-card’, a new initiative to support smallholder farmers’ access microfinance through bank.

This pilot is the only example to date in Bangladesh where a bank and MFIs have partnered to extend micro-credit agricultural loans to farmers. Smallholder farmers have traditionally had a difficult time securing loans from banks due to the rigorous due diligence process. Under this pilot, those barriers will be removed due to two factors. First, all of the farmers are already registered as clients with the participating MFI, and the MFI will ensure that all of the required ‘Know Your Customer’ forms and other validation requirements are collected in advance. Second, Bank Asia will use their automated lending platform to process credit requests quickly and efficiently.

The project also identifies the potential agriculture inputs retailers having Near Field Communication (NFC) enabled smart phone for mobile banking and proceed their business joining alliance. The project and MFI collaboratively select the smallholders and inputs retailers and facilitate them to open bank accounts to the private bank through MFI’s operated agent bank booth. The bank would provide NFC credit cards to the account holders and limit the credit ceiling as per MFI advice. The farmer then would start purchasing of inputs from the selected retailers using credit card and the account to account transfer of money would take place when retailers connect the bank database network through their NFC enabled smart phones.

The project inaugurated the ‘A-Card’ initiative at the Ambika Memorial Hall, Faridpur together with the Society Development Committee (SDC) and Bank Asia Ltd. of Faridpur on August 17, 2016.

The operations of A-Card was demonstrated in front of the audiences at the event and finally A-Card were distributed among 30 project farmers.