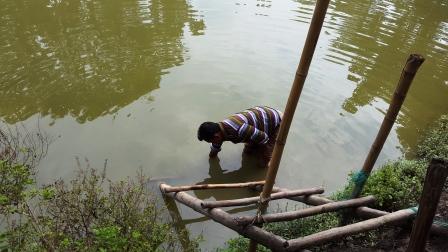 The Gopalpur Fish Producer Group of Mirzanagar Village of Number One Trimohoni Union of Keshabpur Upazila of Jessore District is led by Abdus Sattar; a 40 year old farmer. He has been involved in fish farming and cultivating other crops like paddy, jute vegetables, etc. He also runs a business selling agro input products in his village.

His household income came from paddy, jute and vegetables. He had a very small production of aquaculture which was mostly used for domestic consumption.

Two years back, Abdus Sattar was encouraged to participate in the USAID Agricultural Extension Support Activity (Ag Extension Project) by the field facilitator (FF) in that area. The FF described how the formation of Farmer Producer Groups created a platform to give farmers a voice to call for effective support in agriculture. Sattar joined a fisheries group in his community. He was interested to improve the condition of his aquaculture and also wanted to increase his earning from it.

He received training on different techniques and technologies on appropriate cultivation of white fish (Carp, Rhui, Mrigel, etc.), including pond preparation and feeding techniques of the fish. After participating in two training sessions, Sattar started applying the techniques and other related learning in his pond. He put less fish in his pond. He found improved quality of fish from the same pond that he used to cultivate earlier for traditional and random aquaculture.

He found a noticeable difference between the two approaches and his yields have increased substantially, while the amount of fingerlings and feed he uses has decreased.

It surprised him that putting a reduced amount of stock has given him a surplus amount of around 40 kilograms of fish. Abdus Sattar is now able to sell his surplus production of fish at the end of each fishing season. He is interested in receiving additional training on new technologies so that he can improve his aquaculture practices even more.