DG, DAE visited the Ag Extension Project to monitor the collaborative activities of DAE and the project 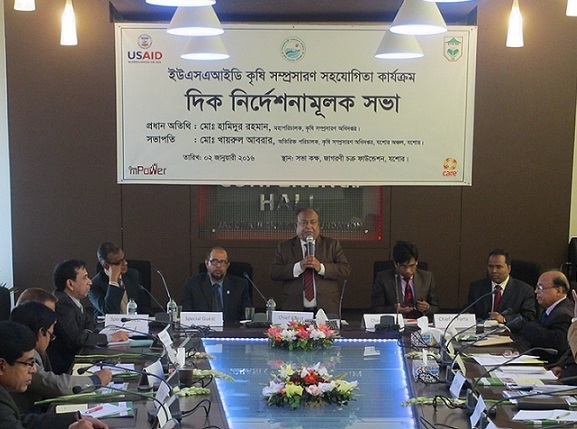 The Department of Agricultural Extension (DAE) and the USAID Agricultural Extension Support Activity (Ag Extension Project)implemented by Dhaka Ahsania Mission with technical partners CARE Bangladesh and mPowerare working together to strengthen the existing capacity of DAE to deliver effective, innovative and value chain-based extension servicesin the Central and Southwest Bangladesh.

The project provides support to approximately 110 Sub-Assistant Agricultural Officers (SAAOs) in these four upazilas to establish a block-level extension center equipped with basic technical resource materials, field equipments, office supplies and ICT devices. The centers act asa base of operations at the block level for SAAOs from which farmers and other stakeholders come to seek information and advices. Equipped with smart phones and updated training in a number of technical areas, it is hoped that the SAAOs will convert these centers into true “one-stop” information-sharing hubs for farmers, extension agents and private sector service providers.

As part of this initiative, Mr. Md. Hamidur Rahman, Director General (DG), DAE, Khamarbari,Dhakaattended and graced a field level consultative coordination meetingorganized for the project staff and DAE representatives as the Chief Guest on January 02, 2016.He also visited one rented and one non-rented AESCs in Jessore. Before visiting the service centers, the respective SAAOs gave a brief description of these centers to him. Mr. Rahman also met with the local farmers who regularly visit the AESC in Chowgacha. Finally he met with other SAAOs of the region at the Conference Room of the Union Parishad of Narayanpur Union to discuss on the AESCs and futurecollaborative efforts.

All the speakers seem hopeful about the AESCs and they also suggested the local DAE officials to utilize this opportunity and create productive linkages between the farmers and public and private extension agents and market actors through these AESCs.

Mr. Bidyuth K. Mahalder, the Chief of Party of the Ag Extension Project along with other representatives of the project and DAE were present at the field level consultative coordinationmeeting.